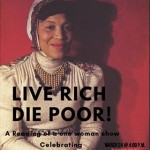 The prolific writing of Ann Wallace took theater goers into the life of the incomparable Zora Neale Hurston during Women’s History Month. Wallace embodied the unsung literary heroine as she read the words she wove together over an 18 year period. The project on Hurston’s life and work is an awesome phenomenon like no other.  Wallace, the playwright of the one woman show, intertwined her original words seamlessly with only a small percentage of  Hurston’s work.  It was like Zora, Langston, and Harlem were there at Theatre South. The vivid images Mrs. Wallace’s words illustrates takes us to Zora’s hometown, to some of to the many places she had been, to see some of the many things she had done, and to Harlem, the “heaven on earth” melting pot for Black creatives of the arts at the time of the “Black Renaissance”.  The most resonating thing perhaps, might be the treatment of and disregard for women in those times that are still prevalent today. As an audience member you might leave curious, wanting to know how much influence Hurston had on Hughes’ work, wondering what if she had received the high standard of illustrious, literary fame she more than well deserved, and how the love and treatment or mistreatment from the only family you have can build you up, or break you down. Throughout the reading “Jump at the Sun” is what  a young Zora remembered her mother saying to her often. She held on to those words, and became who she became. The quote seemed to connect with the  theme/title “Live Rich Die Poor”, meaning you cannot take anything on this side of life with you to death, so live life to the fullest degree that you can, in its entirety, happily, free, and unapologetically. The playwright’s message was alive and thought provoking.  Wallace has crafted a “must-experience” that will enrich the love for theatre and literature in all.

Learn more about the  essential, timely, and timeless work, “Live Rich Die Poor” and where you can catch it here https://www.eventbrite.com/e/memphis-fringe-live-rich-die-poor-by-ann-wallace-tickets-44308409646.

The only suggestion is that you get there fast. Seats fill up quickly for this one of a kind work. The anticipation of the one woman show is much needed in a time when women like Ann Wallace have something of importance to say. “Hear Her Speak.”