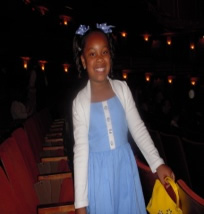 Dariya Imani Jones (Deltina, We Can All Decorate the Same Tree) is delighted and excited to be apart of such an awesome production. Dariya is a third grader from Memphis,TN , were she attends St. George’s Independent School and Open Arms of Love Church. Dariya has previously played roles in several productions, such as a Rat in The Nut Remix (New Ballet Ensemble School), the Raccoon, which was a leading role, in The St. Geroge’s Zoo Play, Tammy Terrell in The Power Summer Camp Recital and others. She aspires to one day become a fashion designer, a lawyer and ultimately President of the United States. Dariya also contributes to the SPEAK TO ME Newsletter as a fashion columnist. She gives special thanks to her strong support system, which includes her parents, grandparents, Mrs. Jones and many others who pushes her towards Greatness, even at such a young and tender age.

Margaret Deloach (Zola, We Can All Decorate the Same Tree) was introduced to the music life at the age of twelve when she began spittin’ lyrics in between classes.   Since 2007 she has won several of talent shows, showcases, and awards. Being a doctor was not on her radar anymore, music was.  In 2007, she won 3rd place winner of Blue Tom Records “Idol Search” (University of Memphis), came back in 2009 to gain 1st place.   2009 she won 1st place of Q-Apollo in 2009 (University of Memphis) and shortly after in 2010 she got awarded the Elvis Presley Music Endowed award from the Rudi E. Scheidt School of Music, at the University of Memphis.  The hip hop artist/songwriter from Memphis TN has passion for the entertainment business, with a focus on music.   Her knowledge of the music industry has come from 3 elements of her life: an Honors Bachelors degree in Music/Business from the University of Memphis (May 2010), her life experiences as an artist, writer, and performer, and her present position with the Music Resource Center as a Program Assistant.  Currently she has completed her 1st EP entitled “Butta’s Permit”; she’s been a part of the band, “Bread & Butta”, and co-written theme song to the “Professor Butler Show”.   While developing more in college she began positioning herself to be the aid for other like-minded musicians in their career.  Now a part of the wonderful Music Resource Center she assists both signed and up and coming artists, musicians, managers, promoters, producers, and DJ’s.  Memphis Music Foundation, Music Resource Center gives her an opportunity to engage in their music career and steer them in the direction in which they need to go.

Epik (Greer L. Harkness) was musically inclined very early in his life.  He was introduced to instrumental music in church at the age of 2.  He showed an aptitude for drums and piano and later added trumpet, and most recently tuba to his repertoire.  Music comes naturally for this Ridgeway High School student, who plans to major in music recording and engineering at NYU.  Epik is “Ready to Fly” (1st solo) into his future and only seeks to “make good music”.  He contributes to the SPEAK TO ME Newsletter as Hip-Hop columnist. In the spring of 2012 Epik won the Hot 107.1 (Memphis local Hip Hop station) Hot 9 at 9 Hip-Hop contest with his first single “My Hand” and was put into rotation at the age of 16. He was also a finalist for the show U Sing On.

Jabari Jones is creative writer and visual artist (born in Chicago, Il. migrating to Memphis, TN at the age of two). He is a talented young lad. At the tender age of two he literally read his first book “The Growing Up Up Up Book”. His love for reading and writing he credits to his mother (Jeanine Jones). “Personally I think my love for reading and writing comes from my mother, and my enthusiasm for art was just with me from childhood” he says. He can write a poem quicker than any rapper can free style. By age five, after one week of school his kindergarten teacher Ms. Portera, recommended him for the CLUE (Creative Learning in a Unique Environment) gifted program. In fifth grade (2007) he won the Winridge Elementary Spelling Bee, going on to the Memphis-Shelby County finals. Later he was excepted into the Optional Program at White Station Middle School, Memphis, TN. In the sixth grade he was challenged by his teacher, Ms. Cook to complete a creative writing assignment about dressing a turkey. This story was so unique that it became his first book, Dressing Gobble Turkey, (due to be released by Speak To Me Books, 2012).

In Middle school Jabari played football, baseball and ran track. This very athletic and competitive young man loves sports and is the sports columnist for the SPEAK TO ME Newsletter. During the summer of 2010 Jabari (with the support of family and friends) traveled & studied abroad to Australia (http://jabarisaustraliaadventure.blogspot.com/)with the People to People. This opportunity of a life time exposed him to a diverse culture which he respects and appreciates. He currently attends Power Center Academy High School. Jabari says that reading and drawing are some of his many talents and something that he desires and does naturally for pleasure. Ultimately, he aspires to become a professional football player (who has researched the odds and statistic of the idea and constantly been reminded by his parents of the odds). He also plans to become a Sports Journalist. He has been writing and performing poetry (Mother to Son Skit) with his mother and brother since he was ten, performing at Slave Haven and the MEA African American Celebration. He has also been a member of countless Power Summer Camp production, including The Wiz (scarecrow) since 2005.

Montrail Jones (Alpred, We Can All Decorate the Same Tree) is a humorous young fellow who loves to interact with others. He is truly a people person, who loves others. He is a fourth grader at Richland Elementary, Memphis, TN. Montrail also loves music, he has been known for and found humming a tune or making a random beats (on desks, books, tables). He has studied piano and Martial Arts since 2008, while he enjoys them both he is considering  music as one of his career choices.  He has even produced beats on the kid friendly Class of 300 former interactive website. Like his brother he is a sports fanatic who likes to draw. Ultimately he aspires to become a professional football player (although his parents are not fully in agreement with his career of choice). He also plans to become a Sports Therapist/Journalist. He has been writing and performing poetry (Mother to Son Skit) with his mother and brother since he was five, performing at Slave Haven and the MEA African American Celebration. He has also been a member of countless Power Summer Camp productions, including The Wiz since 2005. He has been inspired by writing and is currently working on a musical story, Jojo’s Drum.